Staff are happy to travel, but not to the office! 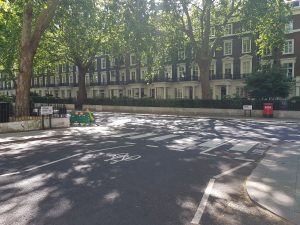 24/06/2021. Last week I travelled to  London by train for the first time since March 2020. In fact I travelled in twice, once on Wednesday for a client meeting, and again on Saturday. Both times I travelled from our local station, Cookham, before changing at Maidenhead for the Paddington train. The 2 journeys couldn’t have been more different, and I found that extremely odd.

On Wednesday I left the small commuter village of Cookham’s station at 08.49 on a train with a capacity to seat perhaps 120. I was one of only 8 people on it. I changed at Maidenhead for the fast train to London. Normally people would be jockeying for position along the length of Maidenhead’s platform 4, but there was virtually no one. I boarded an almost completely empty 9.04 fast train, before arriving 25 minutes later in Paddington, where I had time to dawdle on the platform, wondering where everybody was.

My walk to Lancaster Gate (I’ve always preferred this to the morning sardine cram on the Bakerloo line from Paddington) was pleasantly people and traffic free. I stopped to photograph a sign I liked outside a coffee shop saying ‘Support your local caffeine dealer.’ If I’d tried to stop 2 years ago, I’d have been knocked over by someone dragging a wheely trolly. I didn’t see a single wheely trolly in my entire trip, and that in itself was delightful.

When I arrived in Bank, via a near-deserted Central Line tube train, I was astonished to see Cheapside completely bereft of people. I looked at the many shops, with nobody going in, and nobody coming out. A gentlemen’s tailors I’d once bought a wool coat from, was offering great bargains on smart suits, but there were no takers.

When I arrived at my client’s offices a few minutes’ walk from Bank station, Adam, the CEO, told me, from his almost empty offices, that there were virtually no office workers actually working in London. From his office window I could see that was true – row upon row of empty dark office windows in the surrounding office blocks and skyscrapers. But he also told me that while the offices were empty, the pubs and restaurants were full, and he wasn’t exaggerating, because after our meeting we had lunch in a large and packed restaurant on the roof top of a building adjacent to Bank station. Despite a sizeable external dining terrace, there were no free seats outside, on what was abeautiful sunny day. Food at COQ d’ARGENT was superb, and the service was pretty good despite half the staff having that slightly panicked look I associate with new employees on their first day. Given the well documented staffing problems in hospitality, they probably were on their first day.

Roll on to Saturday when Catherine and I travelled in to London, to meet our long term friend and staff engagement expert Michael Stone, to discuss some client projects coming up. It couldn’t have more different to my experience on Wednesday. The local commuter train was busy, Maidenhead’s platforms were typically full for a Saturday, and we witnessed a heated encounter between a train guard and a delightful looking woman with a tag attached to her ankle. The slower train to Paddington had people sitting in nearly every group of seats, children were charging around freely, and someone of dubious breeding spent the entire time between Langley & Ealing Broadway volumously spewing his guts up in the toilet cubicle. This all served to remind me how much I hate travelling on public transport, and I thought fondly of my car.

Unlike Wednesday the streets of London were heaving with pub, restaurant and theatre goers and a large number of Scottish football fans happily celebrating not losing the dullest game of football I’d ever seen (the night before England and Scotland drew 0 – 0). Now admittedly we were on different streets, walking from Holborn to Covent Garden to meet Michael, but the whole experience was Saturday’s chalk to Wednesday’s cheese.

Happy to travel, but not to work it seems….

People are happy to travel again, it seems, but not to go to work. If it’s a workday, they’d rather stay at home, in accordance with government guidance, or the current lack of it. But on a weekend, it’s a different matter and people flock to the stations in droves, happy to head to the city, the coast, or anywhere there’s a bit of enjoyment to be had.

And this is all very, very odd. If people are happy to travel to the City to enjoy themselves at the weekend, why don’t they want to come to the office?  It can’t be fear of Covid can it, because the virus doesn’t take the weekend off. In the recent heatwave, an air-conditioned office became a luxurious place to be, but it seems staff, many of whom our clients tell us are free to return to the office if they want to, simply don’t want to.

As Barclays CEO Jes Staley said in this week’s Sunday Times (and I completely agree with him,) the office is a place where the less experienced learn from those with more experience, a place where views are exchanged in real time, and where innovation happens. A LinkedIn survey last week established that of 2014 people who responded, only 12% were in favour of returning to the office full time, whereas 49% wanted hybrid working, more than the 38% who wanted to work entirely at home.

There was a real danger that the UK’s handling of Covid, and the constant transmission of unqualified messages of death, will have put a long-lasting fear of socialising into many people, some of whom will still be genuinely nervous of returning to the normal behaviours of civilisation.  These people will need help, reassurance and support, but for most of us it seems to me, possibly because we’re vaccinated, we’re not scared of returning with our friends to the pubs, restaurants and other entertainments that we’ve been deprived of for the last 15 months.

What will make the office a destination of choice for staff?

If businesses want to bring people back into the workplace, with all the undoubted benefits that this brings for organisations and staff, they’ll need to understand why their staff are not rushing back to the office, and what they might be able to do to make staff think more positively about their office-experience. That will be quite a journey I think, because the message now is loud and clear – we’re happy to come out to play, but when it comes to work, we’d rather stay at home, thank you.

Wise business owners will, for now, embrace hybrid working, because if they don’t, they’ll lose their staff to the majority of employers who will. To secure a voluntary acceptable level of office attendance, employers will need to spend quality time engaging with their staff to identify the bad bits of office life and to decide what staff want from a happy office experience. I might have mentioned this to staff engagement expert Michael Stone on Saturday. I have a feeling his phone will be busy over the next few weeks.